We accept the challenge

How can we upgrade the stadium lighting to UEFA Level B while improving sustainability, that was the main question by the board of Heracles Almelo, a Dutch “Eredivisie” major league club in the Netherlands. And, could the lighting play a role in the fan entertainment program that the club wanted to expand. Reducing the light emission towards the surrounding houses, was also on their wishlist. And oh yes, not overloading the stress capacity was obviously a key factor. A nice list of requirements came our way. This is a story about how we accepted the challenge.

The stadium called “Erve Asito” was rebuilt 8 years ago with a lighting system based on the older UEFA Stadium Guide 2010 requirements. The general light level was reasonably acceptable, however complying to the latest UEFA 360 degree vertical uniformity requirements, is something else. It was no coincidence that TV crews and phographers had trouble shooting proper images near the side, backlines and in the corners. Light was blocked by the stadium roof and the chosen luminaire positions.

Uniform light all over

Proper vertical lighting from all sides, would only be feasible with part of the lighting positioned under the roof. AAA-LUX was able to reach UEFA Level B, even reducing the total installed power from 320kW down to 180kW. Two thirds of the 120 luminaires were being mounted in the masts, one third under the roof. It resulted in uniform light all over the pitch.

Entertainment lighting would not be financially feasible using expensive DMX controllers and cabled connections. For such cases AAA-LUX has developed a way to enable show lighting by using the standard InControl system which is already used for switching and dimming. Show protocols are uploaded in the existing hardware. R&D Manager Karl Driessens: “We offer both DMX as well as InControl equipment, so we know the strengths of both technologies. InControl Showtime has limitations in synchronising with other show elements. But in a stadium where sound delays are very common, it is hard to notice the difference. The difference in cost however, is very clear”. Heracles uses the Showtime elements mainly for the introduction of the players coming on the field, as you can see on the video below.

Light emission towards residential houses is a subject that is receiving much more attention, especially after the more strict obtrusive light directive was published in the Netherlands in 2020. Excessive light emissions around stadiums – with high glare – is often accepted for the reason it is hard to prevent. And indeed, it is a challenge. But since RS (Reduced Spill) technology was developed, AAA-LUX can block a lot more of the lighting towards the horizon, without hurting the light quality and level in the stadium. In case of Heracles Almelo it has lead to a light spill reduction of over 75% (!). Also the three trainingfields on the left side of the stadium have AAA-LUX LED with RS technology.

Erve Asito of Heracles Almelo, is a project in cooperation with Dutch partner Sportverlichting.com and realized in August 2021. 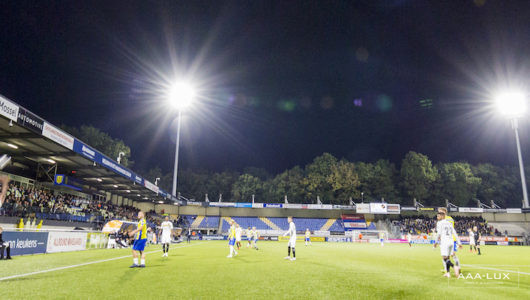