Dutch football club RKC Waalwijk is trying to find its way back to highest level, the Dutch Eredivisie, where they have been playing for years. After their relegation in 2014, RKC Waalwijk is now competing in 2nd league in the Netherlands. The stadium of RKC Waalwijk, with a capacity of 7,500 spectators, has a new lighting system since the start of this season, based on LED. It means in terms of stadium lighting they have already been promoted. 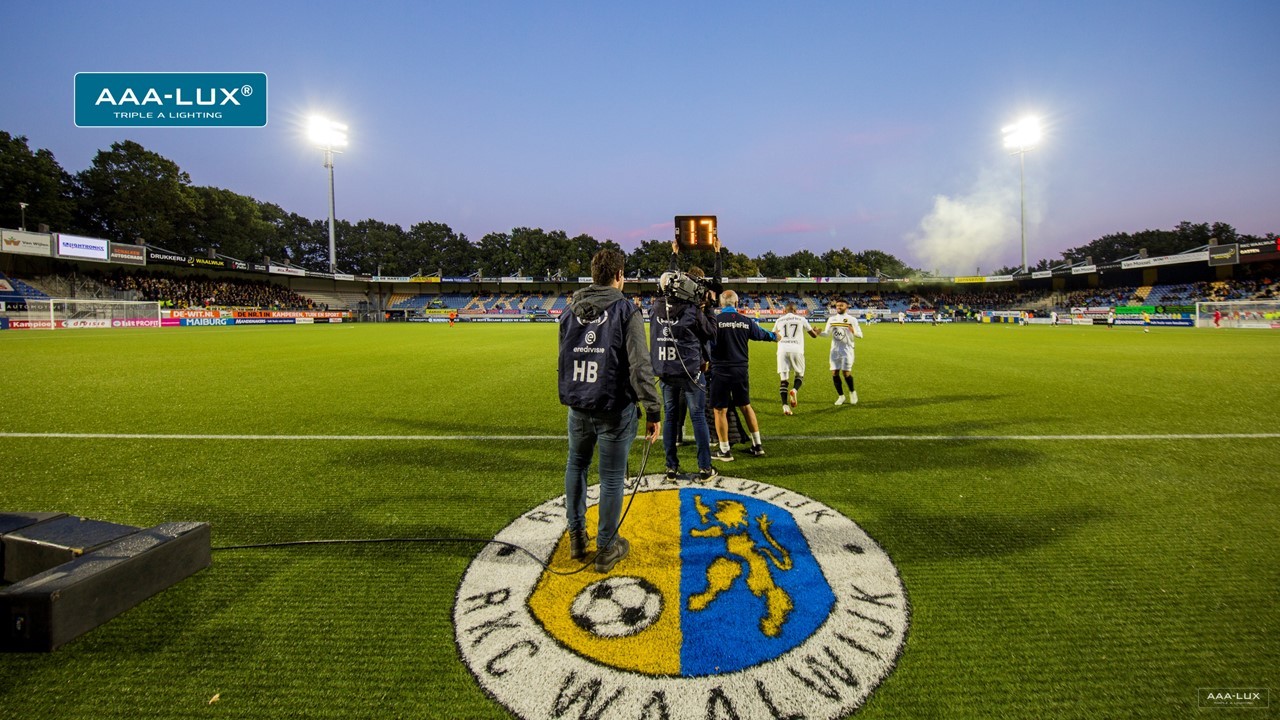 Looking for The Way Up

RKC Waalwijk is a relatively young professional football club. After years of playing in the highest amateur leagues, the club made the switch to professional soccer in 1984. That soon proved to be successful, as in 1988 RKC promoted to the Eredivisie where they were active for 19 seasons. There were even some European matches played and a 7th place in the Eredivisie was the highest position. However, in 2007 they were relegated for the first time, followed by a period of several years switching between the highest and second Dutch league. Since the 2014/2015 season, RKC Waalwijk has been playing in the Keuken Kampioen Divisie with minimal financial resources. After several years in financial dire straits, the club made plans for a better future again with a complete stadium renovation RKC as the first step.

A Complete Renovation of the Stadium

General Director Frank van Mosselveld: “Over the past twenty years, hardly any maintenance has been carried out on the stadium. When you pay us a visit, the first impression is much better now. Everything looks a lot more modern, spacious and neat. People will see a lot of glass, wood and anthracite. The view of the stadium is not the only thing that has been renewed, the stadium lighting of RKC Waalwijk has also completely been replaced. “RKC Waalwijk has converted its stadium to Eredivisie level, we wanted to implement this in all facilities and therefor also in the stadium lighting. The choice to also replace the lighting was simple. “With the old lighting we often had to deal with faults and age. It was simply out of date and clumsy to operate,” says Van Mosselveld.

RKC Waalwijk has the ambition to return to the Dutch Eredivisie. “To be able to take these steps, the facilities first had to be of top level. In addition, the old lighting installation would no longer pass the inspection,” says Van Mosselveld. The existing masts in the stadium could be re-used, provided that the load would not increase. That was the challenge. “LED luminaires are usually larger and heavier than conventional luminaires because a larger surface area is required for heat transfer. For most LED manufacturers this leads to more mas which would make the re-use of existing masts a difficult task,” explains Raymond Wiggers of AAA-LUX. Thanks to the smart design of AAA-LUX, we are the only manufacturer in the world that can re-use the existing masts with an all-in product  including power supply.” concludes Wiggers.

AAA-LUX has installed 80 WS-STAD stadium LED luminaires in the Mandemakers Stadium. “These 80 LED fixtures produce a high light output, allowing AAA-LUX to achieve the necessary light values. In short, the required light level is achieved with fewer and lighter luminaires. This works to the advantage of RKC Waalwijk, as it allowed the old stadium masts to be retained,” explains Wiggers. “Convenient from a cost perspective” adds Van Mosselveld. “This saves us from having to make extra investments in new or extra stadium masts. In addition, RKC Waalwijk has possibilities to expand. “Thanks to the low weight of the AAA-LUX stadium LED luminaires, it is even possible to install more luminaires later on, without exceeding the mast capacity,” concludes Wiggers. 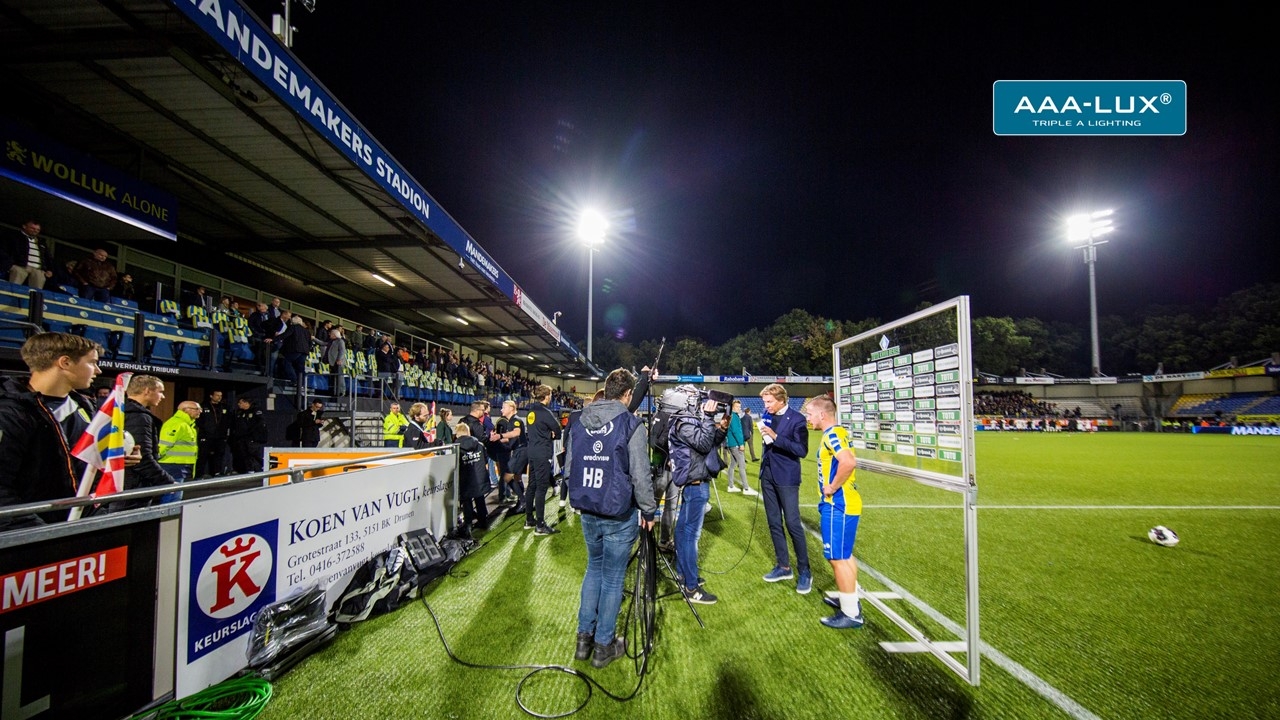 With the renewed stadium lighting and the renovation of the stadium, RKC Waalwijk is once again ready to compete. “The KNVB sets lighting requirements for the professional soccer clubs. The requirement for the Keuken Kampioen Divisie is 800 lux horizontal. With the switch to LED stadium lighting, RKC again meets this requirement,” explains Wiggers. The KNVB has not set any strict requirements for the vertical light values. “But the stadium masts at RKC are perfect for achieving this. We always try to offer the best possible vertical light, even if there are no concrete requirements. Now the stadium amply meets the vertical lighting requirements of UEFA Level D. In the Mandemakers Stadium, FOX Sports and photographers already obtain images of high quality. The TV images speak for themselves,” says Wiggers. An upgrade to UEFA Level C is also within easy reach. More vertical light ensures better HDTV recording. This is not currently required for RKC Waalwijk but as soon as the club becomes more successful and operates at a European level, the expansion possibilities are there.

The stadium in Waalwijk uses the smart control system. The 80 LED luminaires are controlled wirelessly using pre-programmed dimming scenes. “During a match, the lighting is at 100%. During training courses, we simply set a lower lighting setting,” explains Van Mosselveld. As a result, RKC Waalwijk always illuminates its stadium at the right time at the desired level. This minimises energy consumption and light emissions to the immediate surroundings. “The quality of the lighting is excellent, and we can already see that we are using less energy. These are exactly the reasons why we chose AAA-LUX,” says Van Mosselveld. Apart from arguments about finances and lighting quality, the possibility to always select the desired light level of LED lighting also offers a nice contribution to reducing CO2 emissions and thus improves our carbon footprint as a football club.

To remain a front runner in LED sport field lighting, continuous innovation is a must. Actually while writing this case study, the light output of AAA-LUX’ stadium luminaires has been increased. It means today, 9 months after installation, AAA-LUX would use 72 luminaires instead of 80, to achieve the same lighting levels in this stadium. And it will not stop here … 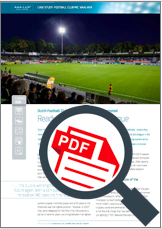