How to get a lead position in top sports…

It’s a genuine success story. In 2009, AAA-LUX, from an office in Eindhoven, the Netherlands, had a worldwide scoop. Within 8 years it gained a lead position in LED Sports Field Lighting. With the introduction of a 6th generation of LED floodlights, the company expects to further expand this position.

Still, people in Eindhoven scratch their heads in amazement. They have taken a prominent position with football clubs in the English Premier League, the German Bundesliga, the Italian A-Series and within the Dutch football world so quickly. Not just limited to football, they have also taken this position within other professional sports, such as the French basketball champions team Asvel, the Roger Federer Tennis Arena or Belgium’s David Cup stadium. These are some examples of top sporting environments in which AAA-LUX is being applied.

Not just a floodlight

The growing popularity of Show Lighting at larger stadiums attracts the attention of the general public. “Of course we do that kind of lighting on a regular basis, but more often we aim our sights on the training facilities. For example, take a look at a club such as Schalke04”, Erik Swennen, AAA-LUX’ CEO says. “They have a need for better lighting at lower costs, so LED is the solution. We then excel with the ability to use the already existing infrastructure, for example, the existing lighting columns. Typically, LED is heavier and bigger than conventional floodlights, in order to dissipate the heat. However, AAA-LUX in 2009 made the principal choice of designing lightweight and small floodlights. This explains the special shape of the fittings. Not just one large light box, but several spots which together form one spotlight.”

Swennen tells us: “People often really don’t think about it, for them floodlights are something simple. And that is how it should be. However, there are a considerable amount of smart tactics and techniques needed to enable this luminaire in LED. Therein we are a specialist.”

Accessible for the recreational sports.

The above example that is used, is a nice bridge to the recreational sports, because the used

infrastructure – the type and positioning of the lighting columns – is comparable. In every town or village you can find multiple sports accommodations where people practice their sports. Realizing cost reduction in such places is a pure necessity. Sports clubs have to get their budget in order and because their lighting will on average be switched on 400 to 1000 hours a year, this reduction in costs plays a major role.

The investment in LED lighting can be easier when all lighting columns and wiring can be retained. With AAA-LUX’s smart design, their product very often fits perfectly within the technical limitations of the existing infrastructure. AAA-LUX has thus made LED lighting viable for more clubs, including those with a smaller budget. Swennen: “Partly thanks to the good uniformity of the lighting and smart techniques in, for example, the electronics, the control of the floodlights or the limiting of light pollution, ensures that we win many projects.” 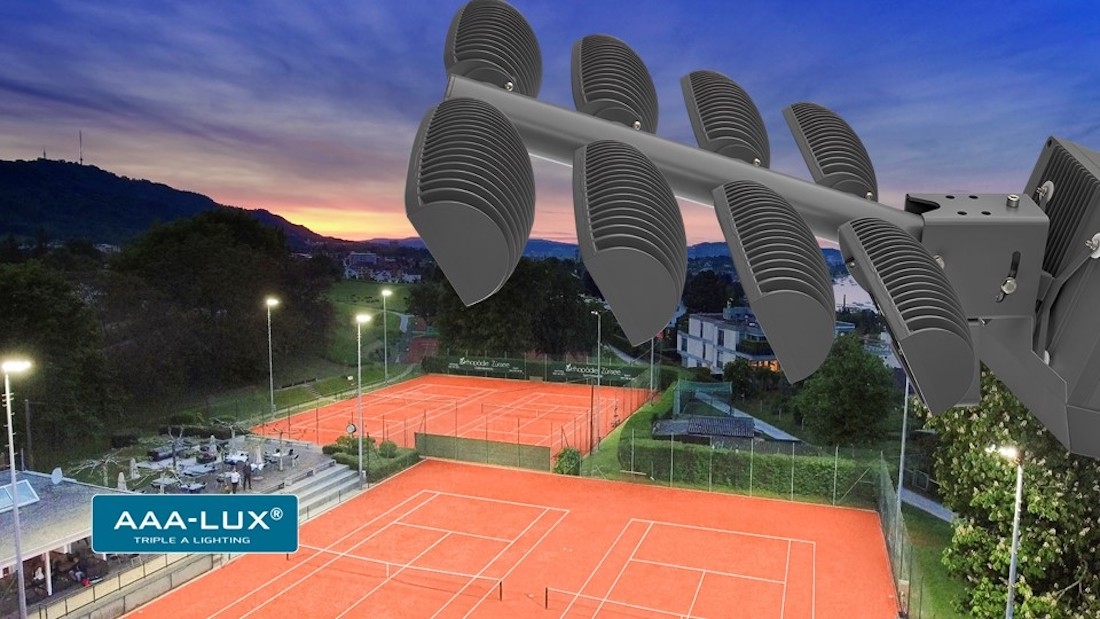 Gen6: Keeping ahead of the game.

Other companies worldwide haven’t failed to notice this. There have been multiple attempts at copying the AAA-LUX’s design basics. Therefore, it is important to maintain the lead position. For this reason, AAA-LUX introduces its 6th generation (Gen6). A fixture which is lighter with less wind resistance than ever before. Naturally, it will fit existing lighting columns even better because of the above. Moreover, the spotlight is elegant and yet robust. “It is already called the ‘V8 Engine’ under the LED floodlights”, according to Swennen, referring to the 8 LED modules that form one floodlight. “An obvious comparison if you look at its tough shape. However, that’s not the case in terms of energy consumption of course”

In addition, AAA-LUX is introducing a brand-new operating system, under the name ‘Control Box 2.0’. “Simplicity in installation and use; that is what’s important. But we see many opportunities in offering user convenience. This is expressed through a touchscreen, or app (appropriately named ‘AAApp’), but especially in the way in which the complete lighting system in being monitored“, says Swennen.

Customers get insights into both energy consumption and the technical state of the lighting 24/7. When a fixture slowly gets hotter because, for example, a bird decided to build its nest on it, the system observes it and action can be taken to prevent a fixture from being damaged. Swennen: “The feeling that the lighting system is being monitored is something that is greatly appreciated by our customers.”

It is undeniable that AAA-LUX is being appreciated, this is evident when we look at their results. They deliver more than 200 projects per year on 5 different continents and these projects are becoming ever more large and striking.

For example, a training complex for the FIFA World Cup or a huge golf course, with a quantity of floodlights with which you could easily illuminate five UEFA Champions League stadiums. Or ski slopes with a comparable size. “The scale is increasing enormously”, says a proud and smiling Swennen.

The new building that was put into use last year is already bursting at the seams. Currently, possibilities to expand are being explored. In addition to lighting sports fields, AAA-LUX also focuses on industrial lighting, also with high and large lighting columns in, for example, ports, airports and large parking lots.

“Things can move forward at a staggering tempo”, Swennen says with a sense of understatement. “And we expect a lot from our 6th generation of AAA-LUX LED floodlights.”

In full control
First GEN6 in the world
Calculate your savings!
Contact
We use cookies to ensure that we give you the best experience on our website. If you continue to use this site we will assume that you are happy with it.Ok