Cost savings and efficiencies with installation and control were the decisive factors for Wahgunyah Tennis Club in Wahgunyah, Victoria. The club is home to tennis as well to netball.

Wahgunyah Tennis Club had some special demands for their new lighting installation. Specification stated 200Lux for netball, while achieving Club Competition standard for tennis. With basically no obtrusive light boundaries come into play, we provided a design that would meet some of the tightest of spill light margins. This ultimately leads to more light on the court. With the ability to get the light where its needed, energy savings can also come in the form of dimming.

With several design characteristics presented in the specifications to be met, we added a control box and switch box. The latter is received by the users as a convenient way to turn the lights off without having access to a phone.

We were very happy to receive the club’s positive feedback. In their own experience, the lighting was outstanding. The improvement that Wahgunyah Tennis Club received from the upgrade was unprecedented and one of the best results that, as they said, Positive Electrical Services has been involved in. In their experience the light levels, light distribution, uniformity and spill light control were on point.

The Wahgunyah assignment is one we look back upon with loads of satisfaction. At this club, many things came together that led to this joint succes. Or as the spokes person at Wahgunyah states: “The results of the design and build prove that AAA-Lux can match and surpass other leading suppliers within the industry.”

The Národný atletický štadión is a multipurpose stadium in the center of Slovakia. With a capacity of between and 7.000 – 14.000, the venue is mainly used for athletics and football. AAA-LUX partner Abatec has equipped the stadium with 4 masts and 208 luminaire LED lighting installation complying to TV broadcasting requirements of IAAF and UEFA Level C. Next to the main stadium there is a smaller athletics and football accommodation has a 24-luminaire installation. It is where young athletes dream of future successes in the main stadium for a live TV audience.

Tested to the extreme

Projects like this an interesting challenge for a luminaire manufacturer. AAA-LUX product manager Rogier Grotenhuis: “People often think that a stadium with a ring-of-fire is the ultimate challenge, but that is not the case. The level of difficulty of a 4-mast installation providing a 360-degree vertical illumination for TV, is where the quality of a luminaire is tested to the extreme. It has everything to do with the distances that light must travel between a luminaire and the aiming point where the light from a luminaire is directed. Distance is the biggest challenge with flood lights, so only an effective LED beam can bridge this distance without losing to much of its punch. It leads to a lower number of luminaires required to reach the objectives. The good thing is that AAA-LUX – besides a ring-of-fire solution – can provide narrow beam for a 4-mast solution like this”.

The well designed 45 masts are accessible and suitable for the all-in luminaires, including driver. In AAA-LUX’s design concept drivers are in top to benefit from natural wind, reduce operating temperature and increase lifetime. The extreme low weight and wind surface reduces stress loads and as a result make the mast more cost efficient. Thanks to the absence of inrush current, the generators do not have to withstand an enormous start-up peak because of which they can be relatively smaller, less expensive, and a lower carbon footprint.

Controls are based on radio frequency communication directly to the antenna at the driver, so expensive cabling for controls is not required. The system can be set to the require settings, as in TV games, lower training levels or the lowest event level. InControl is also used for remote control via the Project Dashboard and for monitoring. Abatec can do service checks from the office in Brno in Czech Republic.

Since this summer the Dietmar Hopp Stadium of Bundesliga Klub TSG 1899 Hoffenheim in Germany is illuminated with LED, supplied by AAA-LUX. The stadium is used by the women’s first team, they became 3rd in the UEFA Woman’s Champions League group stage after Barcelona and Arsenal.

The venue is now illuminated with 114 x LED luminaires, resulting in UEFA Level C in addition to 1.000lux towards the main TV camera, according to DFB regulations. This way the stadium is fit for matches under the DFB as well as the UEFA flag.

A key factor in saving costs was to re-use the existing masts, while increasing the light levels. The light weight and compact design of the AAA-LUX luminaires allowed the 4 x 35 meter masts, which means a cost saving. Also being able to keep the driver in top of the mast, leads to substantial lower installation cost.

Although the stadium is located in the middle of an urban area – houses are as close as 50 meters from the edge of the field – AAA-LUX managed to reduce light spill substantially using RS technology and light shields. The German K-wert requirement is best compared with the most recent international CIE150 light spill directive. Of course for a stadium with a TV lighting requirement you can only go so far, but compared to the old light spill level, the reduction is significant.

AAA-LUX Germany is operated by Kempf GmbH, that manages all AAA-LUX projects in Germany and Austria. The cooperation with Hoffenheim originated since 2014 when AAA-LUX Germany started to illuminate TSG’s training accommodations in the region of Hoffenheim and Sinsheim.

Sparta Rotterdam is a Dutch professional football club and has been playing again on the highest stage in the Netherlands, the Eredivisie, since 2019.

In Rotterdam they are going full steam ahead so the entire project had to be ready for the first home game on August 21: SPARTA-HERACLES.

The conventional installation included 160 x 2Kw fixtures that were replaced by 102 x AAA-LUX fixtures. This replacement alone provides a saving of 55-60% on energy consumption and on top of that comes the saving in standing charges and in the possible dimming mode.

The Sales Support Team has faced a number of challenges such as shadowing by LED screens above the targets, the unusual mast positions and the control of the voltage on the other side of the field compared to the control room.

The application of smarter, technical solutions compared to the competition has ensured that Sparta has opted for AAA-LUX. Driver position at the top of the mast ensures lower installation costs compared to Signify, in addition, the RF light show was also much more cost-efficient than a DMX system.

All this without compromising on light quality. A beautiful light image is realized both in the stadium and on television, much better than what people were used to. In addition, special settings have been made for use by Jong Sparta and during training sessions.

We are very proud that we can make this iconic club more sustainable together with our partner OVI Enschede and that we can let Sparta perform under a high light level.

TV Carolus in Helmond illuminates its tennis courts with AAA-LUX LED lighting. Because they can turn the lighting on or off at any time, the lighting never burns for nothing. In addition to the savings that LED lighting already provides compared to conventional lighting, this saves extra energy. This has a positive effect on both the environment and TV Carolus’ greenhouse.

In addition to LED lighting, TV Carolus has recently invested in many more sustainable measures. This makes TV Carolus an example for other associations!

People living in close proximity of sport venues, while lighting is switched on almost every evening, is a common situation and recognized by many all around the globe.

This is also the case in a village called Wildervank in the North of the Netherlands. A club with a standard size soccer field with 8 luminaires on 4 masts. While the field is 80 meters away from the house, in the above picture the luminaires on the opposite side facing the camera, are at a distance of approximately 150 meters. That is a fair distance you might think but the picture on the left shows how people experience it when light enters their living space.

The miracle of Waalwijk

RKC Waalwijk, a football club located in the peaceful city of Waalwijk (NL), had high ambitions to get back into the Dutch Eredivisie (see last years post for more information on their ambition). And what a fantastic season they had. Check out this video to see what happened:

In the playoffs for promotion they did the unexpected. They took the victory away in the last minute of the final game… and earned promotion to the Dutch Eredivisie.

The miracle of Waalwijk … that is what they called it. But was it really a miracle? Let’s turn back time to the preparations for this amazing season. The club refurbished its 7.500 seat stadium, invested in new fitness facilities and applied new training methods. All this could ofcourse benefit their results, but they also invested in something else…

..Something that gave them clear vision, made them see the ball and their target distintcly, made their yellow and blue colors stand out; AAA-LUX LED lighting!

This is great of course, but to call it a miracle… it’s just our daily business, just like we’ve done it in 48 countries, spread over 5 continents. A more extensive reference list is available upon request, which not only contains more  on professional football references but also on tennis, basketball, athletics and rugby stadiums.

“This way, even the Chinese cannot win on price”

Every sports club wants to put its stadium or sports fields in their best light. “In practice it appears that it is extremely valuable to look at the right figures at an early stage. List all the facts and then take stock. Make sure that you choose a supplier that is interesting in terms of price throughout the project, and also during its lifetime, but at the same time also offers highquality LED lighting. And don’t forget to ask critical questions. Digging deeper into matters often provides interesting insights, ”concludes Michel van Dooren of AAA-LUX.

Read more about how to make the right decisions when investing in lighting in the article below! Learn from some of our recent projects in France, Estonia and Malaysia. 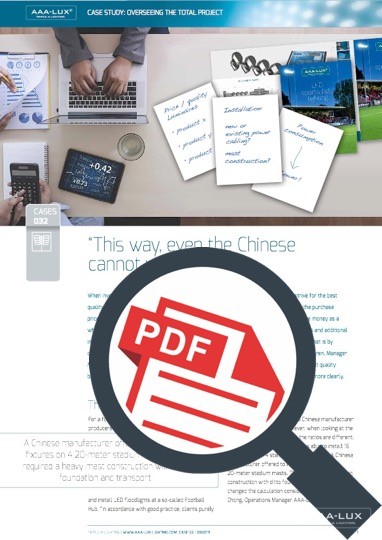 Another great project for AAA-LUX in Australia.

This time at the Burleigh Heads Bowls Club, situated close to the beautiful Australian Gold Coast. In this area there is a natural spirit here found in the incredible beaches, the oceans, the surf and the cool waterfalls and deep forests in the hinterland. But there is a human spirit too, dedicated to family, vitality and having the time of your life.

And they also play bowls, at the Burleigh Heads Bowls Club. This welcoming club has a relaxing atmosphere. Here, regardless of age, many people come together to play this outdoor game. In 2019 the Bowls Club wanted to change from conventional lighting to LED lighting, so they decided to team up with AAA-LUX. Their lawns have pristine conditions with full size greens which are floodlit for Night Bowls. Here they can train and play competition all night long.

AAA-LUX LED offers the club bright light in the night, with high quality & high uniformity. Energy consumption is reduced during games. The design of AAA-LUX allows re-use of existing masts and cabling which keeps investment as low as possible. Thanks to wireless controls and fast scene selection, the system is easy to operate.

Burleigh Heads Bowls Club have a great facility with high quality LED lighting, where their hours of joy has now been expanded.

Big thanks to Arealux for realizing this project!